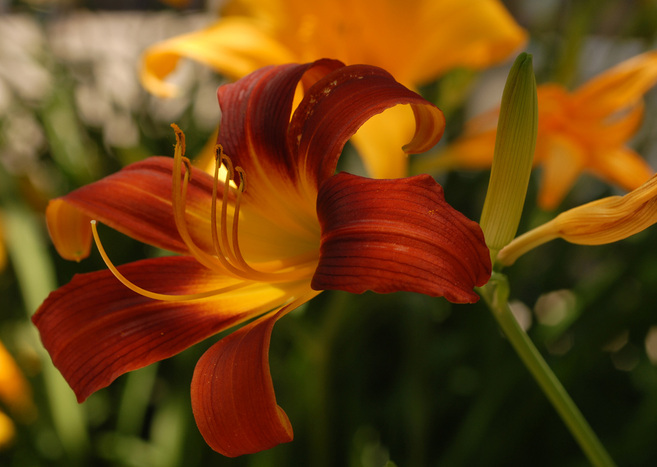 Lens Selection
There is nothing that impacts an image more than the lens used. Lens selection impacts angle of view, the depth of field (DOF), how the image is composed, and how close you can get to a subject, basically everything.  Lets start with the basics.

Angle of View
The angle of view is how much a lens is capturing.  A 180 degree angle of view is a very wide field, fisheye in most cases. A 5 degree view is very narrow, about equal to a 400mm in 35mm. Our eyes normally see about a 50mm angle which is why 50mm is considered a normal angle of view in 35mm  photography.  There are four common classifications of lenses, wide, normal, telephoto and super telephoto lenses. Wide covers 12mm to 35mm, normal from 40mm to 65mm, telephoto from 70mm to 200mm, and everything beyond 200mm falls into the super telephoto category.   I am using full frame 35mm for a reference, so lets discuss other formats.

A Full Frame 35mm camera will be our base as that was the standard for more than 80 years.  Since digital a common alternative is the APS sized sensor.  In fact this is a more common sensor size than 35mm.  APS is 1.5x that of 35mm, so a 50mm lens on full frame camera becomes a 75mm lens on an APS camera.  One thing to be aware of is that the DOF of a lens does not change much with the sensor size.  So the DOF of a 50mm lens on a 35mm sensor is very similar to the DOF of the 75mm (50mm full frame) on the APS sized sensor.   This has implications especially when dealing with tiny sensors and it becomes difficult to separate the main subject from the background.  Another common size is the 4/3's sensor.  That is a easy conversion at 2x, so a 50mm lens on the 4/3 format is equivalent to 100mm. Now we are dealing with even more DOF which can start to impact our images, where the separation is no longer as evident as it was with the 35mm format.

There are many sensor sizes in today's market. Most are shown below, and while the image size is not exact the proportions are accurate. 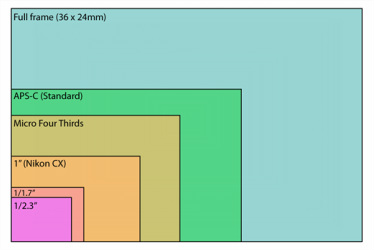 Sensors are expensive to manufacture, but that does not prevent manufactures from adding additional sizes. Looking at the chart it is easy to see why Point and Shoot image quality suffers especially shooting at high ISO's where noise is a factor.  Tiny sensors have some pitfalls that are difficult to over come. Sensors get better as technology advances, so some make the argument that a tiny sensor is better today than ever. Just remember that bigger sensors are also getting better as technology matures.  The question to ask is what is the print/display size goals?  If you want to print 20"x30" sized images a bigger sensor like APS sized or bigger is desirable. If you simply want to download JIF's to photodo maybe an inexpensive point and shoot is all that is needed.

Lens Types
There are many lenses out there, and that number continues to grow as camera manufactures find ways to continue to improve lens coatings and design.  With smaller sensors big glass need not be so ..... well big.  When looking to buy, do a bit of research before spending your hard earned cash.  Lenses fall into two main categories listed below.

Primes - These are a single focal length lenses like a 20mm f2.8.  They are generally fast, f1.4 - f2.8.  When getting into the super zoom class the aperture may seem slow but in fact a 600mm f4, for example, is a very fast and big lens.  As technology advances having a fast lens can become less of a factor with the exception of niche markets like Sports. Big glass like the 400 f2.8 are generally used with a tripod or mono pod to steady them.  Big Glass costs big bucks!  A 300 f4 is much more practical vs. it's f2.8 cousin, but still will set you back over a $1000.
Advantages - fast and small (relatively).  Disadvantages - one dimensional and expensive.

Zoom - These lenses can have fixed apertures, or variable apertures, can be wide or telephoto, and can be 2x to 12x zooms.  The  "do everything" zoom tends to have more flaws, but zooms have reached a point where they are generally solid performers. There are some very high quality zooms out there like the 70-200mm f2.8 VR that will set one back over $2000.   Read about the specific lens you are looking to buy. I have an Nikon 18-200mm f3.5-5.6 that is very good and is rated very high in lens tests.  Not as good as the 2-3 fixed aperture fast zoom lenses that would be needed to replace it, but damn close.
Advantages - one lens does more, so less to carry.  Can switch from wide angle to telephoto without changing glass. Often much less expensive than carrying a bunch of primes.  Disadvantages - Generally Slower, and larger than a single prime. Sometimes one needs a fast prime, there is really no other option.

Lens Attributes
There are slippery terms floating around, like Macro to identify a lens that will not do a 1:1 magnification. I consider macro life sized but manufactures now use macro to define whatever they choose, but why do lens makers use such loose terminology?  Because consumers are not always well educated.

Focus - Some lenses can do 1:1 macro. Some have very poor close focusing capabilities. Focus speed is also important as is the ability to focus accurately. Some lenses hunt and will not always lock focus.   We all want fast solid auto focus but it becomes more critical if your paid to shoot.

Auto-focus - There are three types of focus out there, contrast detection, phase detection, and a hybrid (Nikon) system.  In addition the phase detection system uses a technology called the "predictive focus tracking system" to determine the focus of moving objects. I am not going to go into how this all works as it fairly complex, but I will comment on the user experience.

Contrast focus systems work well for focus on a static subject. Contrast focus systems have a difficult time with tracking moving subjects which is a big pitfall in these cameras. Predictive focus tracking works very well for tracking movement and for all situations based on my experience.  I am a little less clear why a hybrid systems is needed but apparently it also works very well.  Nikon came up with the Hybrid system, and apparently it works in all shooting situations.  Nikon boasts that the hybrid system is their fastest auto focus system.  That says something when you include cameras like the flagship f4 with a rock solid focus system that tracks subject movement at 10fps.

Some Random Thoughts
It's fairly common to see a fast 50mm prime lens like the Nikkor 50 f1.4.  Once you go past 100mm fast lenses become expensive.  The longer the lens, the bigger it is, and it becomes increasingly expensive to make it lightweight and fast.  For example the 300mm f/2.8 G-AFS ED-IF VR Lens at 6 1/2 lbs is big glass, like seen on the sidelines at NFL games. The  Telephoto AF-S Nikkor 300mm f/4.0D ED-IF Autofocus Lens - Light Grey is 1/5 the cost and is one stop slower.  Most of us will never own a f1.0 lens, although they make an affordable f.95 lens for the 4/3 system, the Voigtlander Nokton 25mm f/0.95 . At $1200 it is affordable but manual focus only.  Most wide to normal primes are f1.4 or slower.

Purchasing lenses can be a daunting task.  Read a lot, and you can always sell a lens you purchase that you are not using.  I increasingly favor zooms as they are handy and do a reasonable job in most situations.  There is a time however for the big guns. Birding and professional sports are two subjects that benefit from expensive glass.