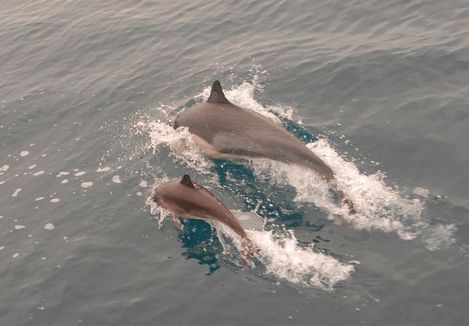 Aperture, shutter, and ISO, an Introduction

It is no accident I title my first discussion with the name from a book written by the legendary photographer Ansel Adams.  Despite the times, equipment remains a key ingredient in good photography.  Regardless of all the high tech mumbo jumbo, the camera retains the basic functionality from the 1920's. If your camera is so automatic it does not allow control over the basic settings it maybe time for a new camera. Many low end Point and shoot, and all 4/3rds, rangefinders, and DSLR's offer manual control.  So what are the three simple components that remain unchanged after nearly 100 years?

Shutter selection controls how long the shutter remains open.  If the shutter remains open for 1/500 of a second most action will be frozen.  This is often desirable, for example the dolphin image above where the action is stopped at a peak moment, in this case the dolphins are in mid-breech. Shutter speeds range from 30 seconds to 1/8000 or faster. There is also Bulb and Time modes for long exposures greater than 30 seconds.  With such a wide selection the photographer has a lot of freedom shooting most situations.  Some examples include stopping a bullet, or shooting stars at night.

Aperture control provides the shooter the ability to control the Depth of Field, or how much of an image appears in focus.  There can only be one plane of focus in every image so why do some images seem in focus from edge to edge? The answer is depth-of-field.  Notice in the dolphin image above the water appears in focus as do the Dolphins.  If I had shot with a large aperture my background may appear out of focus as it does in the Water Lilly image at top.  The aperture setting for both of these images was not an accident.

ISO or sensitivity is a term from the days of film, however it has meaning in the age of digital.  The manufactures have retained the values from film, and in digital the sensitivity behaves like film.  The lowest sensitivity will produce the cleanest image, and the higher sensitivity values will display more grain.  So why would anyone use a high ISO if the result is grainy?  The answer is simple, more sensitivity means a faster shutter speed and/or more depth of field when shooting in low light.  An example is a nighttime football game, or a rock concert.  Sometimes stopping action becomes more important than having the cleanest possible image.